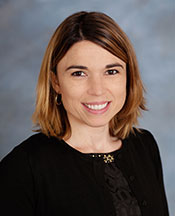 Before moving to Oakland in 2016, Allegra lived in the Santa Cruz mountains. She studied linguistics at the University of California, Santa Cruz where she graduated cum laude and received a Language Studies bachelor’s degree. While earning her juris doctorate at the University of Pacific, McGeorge School of Law, she volunteered with Equal Justice Works and interned at multiple non-profit clinics including Disability Rights California, Watsonville Law Center, the McGeorge Immigration Law Clinic, and the Pacific McGeorge Housing Mediation Center. Allegra’s legal career has consisted primarily of practicing civil defense, ranging from automobile accidents and slip and fall cases to breach of contract and legal malpractice. Her legal experience includes pre-litigation negotiations and claim development through pleadings, discovery, motion practice and trial preparation. In her free time, she plays ice hockey on multiple co-ed teams as well as one nationally ranked women’s team. Whether she is advocating for her clients at Frassetto Law or skating for a goal at the ice rink, Allegra is an integral part of the team, always striving for the best outcome.

Based in Oakland, Frassetto Law LLP handles claims across Northern and Central California.